I know too much about television. Almost everything I watch has prior knowledge attached and thus the weight of expectation. I rarely have the chance to form my own opinions away from the general consensus. So, earlier this week, I decided to embark upon an experiment.

There was nothing to be found on the iPlayer that fit the categories of the experiment. The iPlayer is a wonderful beast, but is a regular port of call to check I haven’t missed anything new. It also does not have the same back catalogue nature of Netflix and 4oD.

Netflix is limiting when searching for something new, unless you know the name of it. Everything on “My List” fell into the prior knowledge trap.

4oD has a great back catalogue, but forces adverts. In order to complete the experiment I decided I was willing to subject myself to many, many repeated adverts for Cobra, Grolsch and Fosters. Is that extremely beery collection unique to comedy watchers? Channel 4 viewers? Or me particularly, since I was signed in?

The programme I found was The Mimic, first shown on Wed 13th March 2013 – that info is on the 4oD page, I promise I didn’t break any researching rules. Here it is. 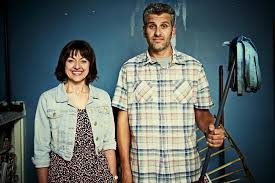 I watched all 5 episodes of series 1 over the course of 3 days, between killing mould and Gamesmastering (one of these is my job, the other a necessity).

The Mimic has charm. The lead character, Martin Hurdle, is a not quite convincing mix of average Joe and skilled mimic. His platonic relationship with Jean is nicely drawn, as is his friendship with Neil the newsagent. When Martin meets his son, Stephen (leader of the Unsullied, right?!) their relationship is also carefully handled and touchingly played.

There is a relatively slow pace to proceedings for the most part and I enjoyed that. Some of the interchanges between characters have a flavour of reality not often found in sitcom. The problem is that there are two sitcoms here, battling for supremacy. It feels like Channel 4 were not quite convinced by the quiet and understated sitcom about a site maintenance worker who discovers he has an 18 year old son and so someone threw in the main character’s ability to do celebrity impressions.

If the mimicry had any thematic bearing on the rest of the story, I would feel differently. The idea that Martin has never used his skills of impression to achieve anything is completely separate from his making up for lost time with his son. The two strands are magically brought together when Stephen decides to represent Martin and has contacts to get him voice-over work.

Even though the mimicry can be jarring, there is good comedy within it (Ronnie Corbett in the postbox). A lot of the drama feels forced, whereas the interactions have truth to them. I’m not sure why I missed it on first showing; there is a series 2 on 4oD, so it must have had some support.

The Mimic lies somewhere in my “intrigued to see what else the writer/creator has done” category, a promising sitcom with some flaws.

I judge this experiment a success. Number 4 in my method has not happened yet. If it throws up anything hugely enlightening, I’ll attach an addendum. But it was very nice to come to something completely fresh and come to my own conclusions. Now, let’s see if I was right about my opinions…

Almost certainly a man who attempts to be funny and/or creative for a living. Actor, filmmaker, writer & optimist.